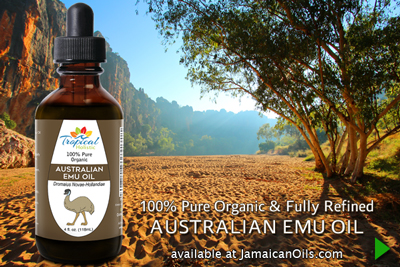 Emu oil was first used by the Aborigines, natives of Australia, and is a vibrant part of the Australian culture. The Aborigines are considered to be one of the oldest people on the face of the earth!  Emu oil comes from the Emu bird's fatty tissue found on the bird's back under the skin and muscle. The oil is rendered, purified and refined for all of its health benefits.

Since over 70% of the fatty acids in emu oil are unsaturated OMEGA 3, 6 and 9, it has for thousands of years worked wonders as a topical "healing oil". Indeed, emu oil is said to mimic the top layer of our skin since it is 100% triglyceride lipid, almost similar to that found in our skin. In the sometimes harsh sun of the Australian Outback the Aborigines found that emu oil not only hydrated and nourished their skin, but it also helped to relieve joint pains, muscle aches, and was a very effective treatment for their cuts and bruises.

Many of us use Australian Emu Oil to help thicken, strengthen and grow our hair by simply massaging a few drops into our scalp several times per week or by adding to our shampoo.

Yes, Australian Emu oil is used in the beauty industry a lot today, however, for many it is mostly respected for its "medicinal" benefits. It's no wonder that today many people include emu oil in their range of healing products for relief of inflammation in their aching joins, sore muscles, for relief of carpal tunnel syndrome, sciatica, gout and more! Many also use topically and even on a medicinal level to advance the healing of wounds, cuts, and burns from radiation therapy, to reduce scarring and keloids, to heal surgical wounds caused by removing skin for skin grafts, to reduce redness due to acne, to reduce bruises and stretch marks, and to soften dry cuticles and promote healthy nails. Emu oil is also used topically for to help relieve athlete's foot, diaper rash, canker sores, chapped lips, poor circulation, and skin conditions, including cancer, dry skin, dandruff, eczema, psoriasis, wrinkles or age spots. It is also used to protect skin from sun damage and to promote more youthful looking skin. You may also apply emu oil to skin to reduce irritation from bedsores, shingles, hemorrhoids, insect bites, frostbite, rashes, razor burn and the list goes on.